I’ve been to the zoo today.

My first step was visiting the giraffe baby. He was born on 15. Jun. and today in the evening he will get his name. I was not alone – of course. Lots of children, lots of grand parents and a class of school children with a art teacher. Now I know one more time why I love Carla Sonheims drawing classes so much. And why it took ages for me to start drawing and creating again. That teacher shouted at some children: “If you want to paint a giraffe, then do it in the right way.” Autsch!!! “No, that is wrong. Look once again at the giraffes tong…” Aiii!! The killing of creativity in a german school.
The whole time I was not able to calm down and find a rest in this busy zoo. Everywhere children were “hunting” information about the animals for their homework. Everywhere mothers bitch at their little children in a (for me) scary way. Everywhere children were crying and wining because of not getting ice-cream or not going to the tigers right now(!) or not being allowed to run free where they like. And the only calm place which I could find was the smoking area. So sorrily I did no stroke with pen on paper.

But I got some nice photos.

And – believe it or not – the animals weren’t to see at their places. They were sleeping and resting and hiding in theire houses. All. All animals including the birds which were standing on one leg and covered their head between the feathers… All the time when I was walking though the area.

But then in that way I got a wonderful look at the lion couple: they were sleeping like spoons (“löffelchensweise”). I hope you can see this. It’s a bad photo because I had to shot through thick glass: the male lion rested behind the female and put his hind leg on the botty of the female and embraced the female with his foreleg.

Did you know that lions are not the larges wild cats. Look at this comparsion. 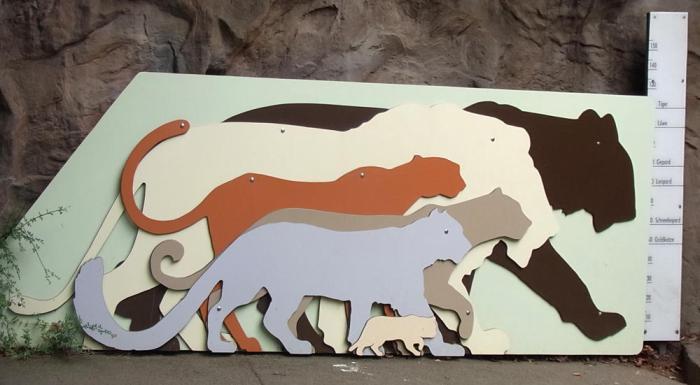 Hanging abround, walking and looking I met some amazing animals…

I met another bird, a relative the Waldrapp (northern bald ibis) called southern bald ibis at a different place at the zoo. this guy was nibbling the shoe of another visitor. I let it nibble at my fingers and it let my fondle its feathers. That was very nice!

This Crane in german is named paradies crane. In English it is named blue crane. But it is grey. I met a couple of this crane. She is breeding on the open grass near the little lake. He is kind of patrol along the fence.

After 2 or 3 hours walking around I felt a little down and depressed. I usually feel this way because I’m so sorry for the imprisoned wild animals. Can’t say….